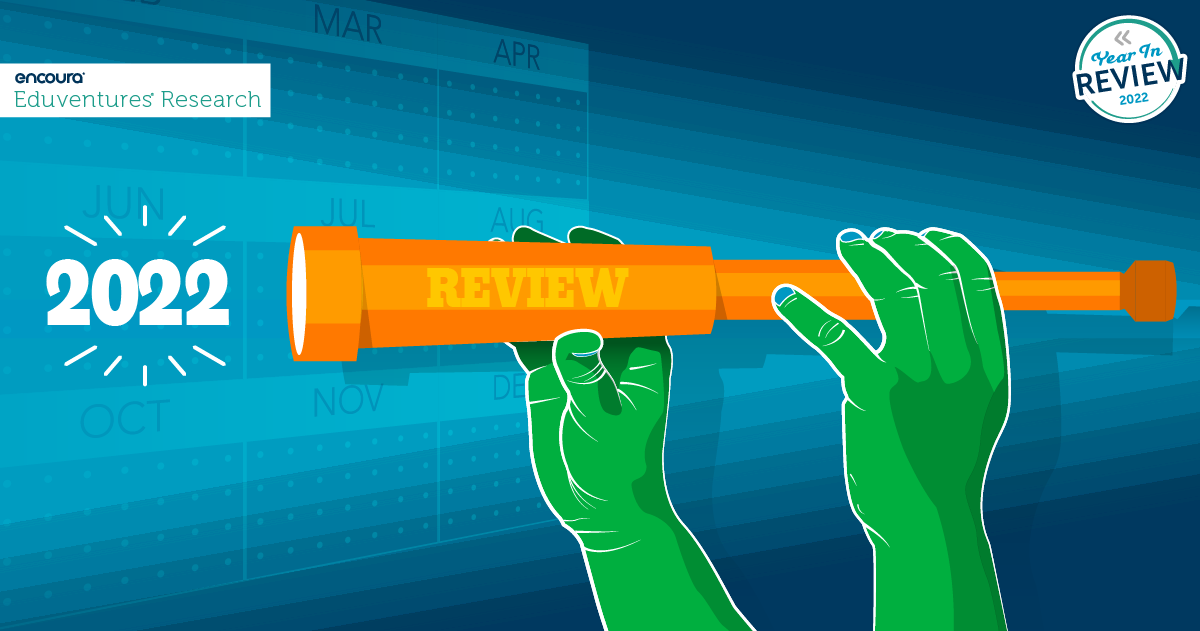 Here is a reminder of my predictions:

In the harsh light of reality, how did I do?

What Actually Happened? I can point to a few somewhat bold moves by individual institutions—see below for examples—but nothing radical. At the system level, the headline is continued stress. Equally, it is hard to “see” all relevant activity in such a big, diverse sector, and it may be premature to say anything definitive about the impact of inflation on higher education institutions. Finite COVID-19 stimulus funds have delayed a reckoning at some schools.

What is clear is that the “Inflation Monster” is alive and kicking. In October 2022, the Consumer Price Index leapt 7.6%, down slightly from recent months, but still a rise of a magnitude unseen in four decades. Interest rates are in hot pursuit, but high inflation may already be entrenched.

Colleges of all stripes saw inflation continue to swallow tuition increases. List tuition and fees, net of inflation, fell 4.4% at four-year privates, 6% at four-year publics, and 6.3% at community colleges, according to the College Board pricing data. This is the first time since 1980 that all three sectors have seen declines two years straight.

But even as revenue continues to slip, schools are still hiring. Total higher ed enrollment is down about 10% between fall 2015 and 2022 but total higher education employment—wages and benefits account for 50-70% of institutional expenditure depending on sector—is down by less than 2% and rising again. Hiring may make sense. Data from a recent survey by the College and University Professional Association for Human Resources highlighted tutors and institutional research staff as two in-demand occupations, pointing to student retention efforts and renewed focus on data-driven strategy. Of course, Figure 1 obscures the “right” ratio of staff-to-students and the challenges of hiring for some specialized roles.

Figure 1 underlines that most schools are banking on spending rather than cutting their ways out of current circumstances. If high inflation and weak enrollment persist—not to mention lackluster endowment returns—this approach will become harder to sustain.

Here are some atypical institutional moves—spanning cost-cutting, price innovation and outsourcing—that caught my eye this year. Not exactly game-changing—and by no means an exhaustive list—but notable nonetheless:

The growing number of colleges and universities offering third party certificates—such as from Google or IBM—to augment student employability is an important trend (see UNC Charlotte). Innovation-oriented consortia are worth watching, including the experiential learning efforts of members of the Coalition for Life Transformative Education and the institutional-edtech company partnerships under the College Innovation Network.

Have I missed a game-changing initiative at your institution? Please let me know.

My 2022 Prediction #2: “Gainful” Returns—But Will Not Succeed

What Actually Happened? Contrary to my forecast, the Gainful Employment revival—designed to hold colleges accountable for programs with poor labor market outcomes—is still in play, BUT two key things have changed:

The rulemaking delay may mean that my original prediction proves true. With more time, higher education lobbyists may dilute the specifics or even stop the regulation entirely. Colleges may point to the federal College Scorecard, a consumer tool that already encompasses Gainful-type data at the program level across all schools, as negating the need for the proposed Gainful data collection for all schools and programs. But it will be harder to argue—without threat of sanction—that routine publication of program outcomes data is illegitimate or unduly burdensome.

These days, both Democrats and Republicans seem bent on “holding higher education to account” with Democrats focused on alleged predatory practices at for-profits and Republicans viewing Gainful as a “fiscally responsible” alternative to Biden’s student loan forgiveness plan. The College Transparency Act—recently passed by the House and requiring the U.S. Department of Education to beef up student outcomes tracking—may emerge as a Gainful alternative.

On balance, I’d say that Gainful now looks more likely to return—and more likely to impact schools and programs across the board—than seemed credible a year ago.

What Actually Happened: While I am not aware of any “state OPM” (online program management) effort comparable to North Carolina’s Project Kitty Hawk (PKH) announced in 2022, one state made a more tentative move:

A non-statewide system echo of PKH was CUNY’s announcement in March of $8 million in stimulus funds to create CUNY Online, an online learning design and support infrastructure across the 260,000 student CUNY system.

Why have we not seen more PKH-style initiatives? Perhaps other states are unconvinced that a centralized effort is the right bet, preferring to leave institutions to duke it out, with or without commercial OPM partners. In 2022, two more states (Montana and Nebraska) partnered with Western Governors University (WGU) to expand online capacity, turning to a national online giant rather than investing in online at homegrown schools. WGU is now partnered with ten states. Getting “back to normal”—meaning back to the physical campus—may have pushed online learning down the priority list in many states post-pandemic.

Legislators may see more mileage in funding students rather than infrastructure, such as New Jersey’s 2022 expansion of “free” community college and public four-year study for middle class families and California’s new College Corps scheme which will fund thousands of students to engage in credit-bearing community service designed to lower college costs. New York’s Tuition Assistance Program is to be expanded to part-time students at a cost of $150 million. The New Mexico Opportunity Scholarship, with initial funding of $75 million, will make college tuition-free for many in the state.

Some states this year focused postsecondary policy outside conventional higher education, such as Maryland’s removal of degree requirements from thousands of public sector jobs, Colorado’s investment in noncredit education tracking, and workforce education drives in Connecticut, Texas, and elsewhere.

What is the latest on Project Kitty Hawk? The effort is now proto-operational, with a 50-strong FTE staff composed of internal hires and secondments from third parties, including Accenture, ACUE (the faculty development firm) and Collegis (a kind of OPM). Officials decided that some reliance on outsourcing was key to gathering the necessary expertise and speeding time-to-market.

A detailed plan is now in place projecting that PKH will support almost 30,000 new adult students by FY28 and by then be revenue positive and self-sustaining. But the document acknowledges that the state’s public colleges and universities, while said to be interested in PKH, have yet to make any “firm commitment” on collaboration. The PKH team is organizing “road shows” around the state to drive home why the initiative is a win-win.

It is notable that the plan does not cite any similar initiatives from other states, other than to note past grand online collectives that have ground into the dust. “All eyes are on North Carolina” write the plan’s authors, underlining the uniqueness of Project Kitty Hawk thus far.

Verdict: I was wrong about Project Kitty Hawk sparking imitations elsewhere in the country. But if PKH starts to gain traction, other states will regret that they did not act sooner.

Look out for my 2023 predictions in early January.