Working to Learn or Learning to Work? Rethinking Higher Ed and CTE There’s a consistent trope making the rounds in higher education: most prospective students of all stripes view postsecondary education as essentially transactional and frequently influenced by career objectives.

For those who have labored in the fields of Career and Technical Education (CTE), this is a familiar tune. That it has been adopted by four-year programs raises fresh questions about the assumption that the college degree is the sole pathway to middle-class stability. While four-year degrees remain the brass ring for most learners, could we be on the verge of a Career and Technical Education renaissance?

Funding and interest from policy makers in CTE is on the upswing. In 2018 alone, 80 new state laws were enacted to support CTE, almost doubling since 2016. States are now poised to spend $1,200,000,000 in CTE funding authorized through the Carl D. Perkins Act (Perkins Act) by an otherwise divided congress.

CTE has been central to U.S. education policy for decades. The Perkins Act, the predominant CTE legislation first passed in 1984, has been reauthorized and refunded several times by both Republican and Democratic administrations. Significantly, the most recent iteration of Perkins officially retired the term “vocational,” following decades of use at both the secondary and post-secondary levels.

Perkins V, as the new authorization is known, targets marginalized populations for whom career training and services have been limited. These include the “chronically unemployed or underemployed … from economically disadvantaged families,” and those with disabilities, the homeless, and foster care youth.

Funding for these services are dispersed to state education agencies, which in turn fund a variety of programs at secondary schools. CTE may be delivered within a specific course, or expanded into “concentrations,” which, in theory, provide a high school graduate with the skills to enter an apprenticeship or trade school.

Programs that can be supported by CTE funding tend to emphasize hands-on instruction alongside the applied learning of core academic subjects. At the post-secondary level, CTE leads to sub-baccalaureate credentials in a broad range of trades and vocations.

CTE? Thanks but No Thanks.

Despite bipartisan support, funding, and near universal adoption by the states, CTE enrollment has declined. While 53% of current high school students enroll in a CTE course or program concentration, only 20% of high school graduates select a CTE career training pathway.

A closer look at postsecondary and adult CTE enrollment data reveals downward trends even among some of the fastest growing industries (Figure 1). 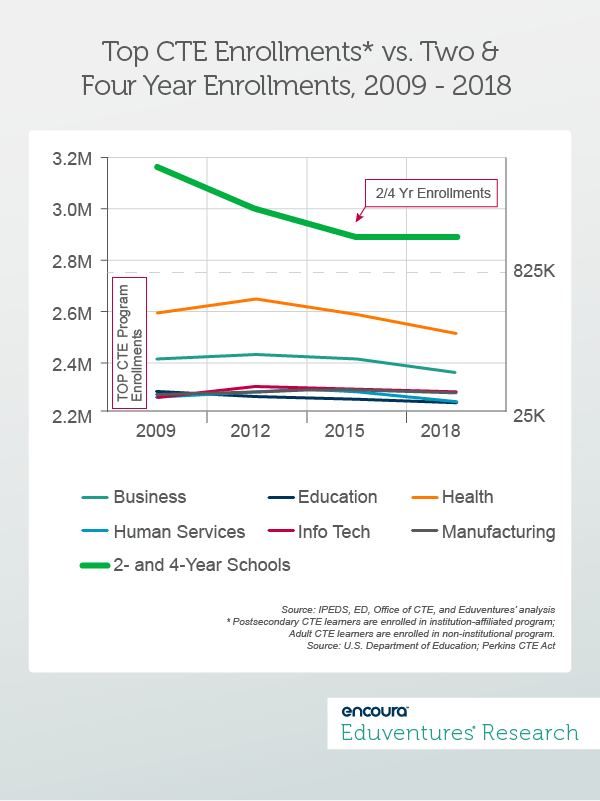 When compared to overall enrollment trends for two- and four-year schools, these patterns reflect continued faith in postsecondary degrees, despite their rising costs. They also pre-date recent efforts to re-engineer and re-brand CTE away from traditional “voc-ed” and toward new technologies–often with a concerted effort to appeal to women and under-represented minorities.

Will Perkins V reverse these trends and convince career-minded millennials and older adults of the potential value of a CTE pathway over a conventional (and expensive) degrees?

What CTE Students are Looking For

ACT | NRCCUA survey results from more than 48,000 CTE students reveal that they are as, or sometimes more, academically focused and realistic about their career options than their college-bound peers. Based on national data from 2016-2019, some patterns stand out:

More research is warranted but this snapshot suggests that that CTE students see themselves as viable to enter either the workplace or college classroom. They can also be exceedingly pragmatic and calculated in how they make decisions about their postsecondary options.

A Next Gen CTE?

What’s next for CTE? For starters, postsecondary and sub-baccaleraute programs should continue to eliminate the social stigma sometimes associated with CTE. Precisely when conventional degree programs may stumble under the weight of spiraling costs, CTE pathways could attract more learners who recognize that a sub-baccalaureate credential, when closely tied to a specific skill set and industry, can provide greater financial stability and an onramp to eventual degree attainment.

Secondly, CTE programs at both the secondary and postsecondary levels should continue to adapt to support fast-growing industries. Our recent Wake-Up Call exploring wind energy revealed a greater demand for turbine technicians rather than engineers over the next 30 years. This does not translate into lower demand for civil engineering, but suggests that lower-cost, wholly transactional training programs can fill an important niche.

Finally, more colleges should recgonize the value of dual enrollment programs to build sustainable pathways from high school to postsecondary. Many CTE programs already have proven their viability as providers of dual enrollment credits and models of outcomes-driven assessment. It would be timely and relevant for more colleges to leverage CTE programs in order to reduce enrollment friction and lower costs as students transition from one period of their lives to the next.

As four-year public and private institutions ponder their future in an age of declining enrollment, a sharper focus on CTE programming may help them bolster and diversify their appeal to working adults and non-traditional learners.

Eduventures® 2019 Higher Education Technology Landscape (Landscape) visualizes over 300 vendors and their products, organized into over 40 separate market segments rolled up into four major categories aligned to the student lifecycle.

Throughout the year, we analyze these vendors and products and make that content available to clients. Several vendors have multiple products in their education technology portfolios. The Landscape image will also be featured in our full 2019 Landscape report later this year.