Where You At?: Texting in Recruitment Outreach About 10 years ago, recruitment marketers were debating the merits of reaching prospects on social media. Did this new channel present a promising opportunity for texting in recruitment? Or was it too intrusive?

Today, we are hearing a similar debate around texting in recruitment outreach. Do schools miss an opportunity if they don’t text prospects? Do they alienate prospects if they text them? When and what should schools text, anyway?

Does the Early Bird Get the Attention?

As Figure 1 shows, high school seniors are most likely to receive text messages from college admissions and are most likely to have engaged in a text message exchange with admissions representatives. It is interesting to note, however, that seniors are less likely than their younger peers to show a preference for this method of communication. There is also a vast gap between the percentage of seniors who receive text messages from admissions and those who actively engage in a text exchange with a college representative. 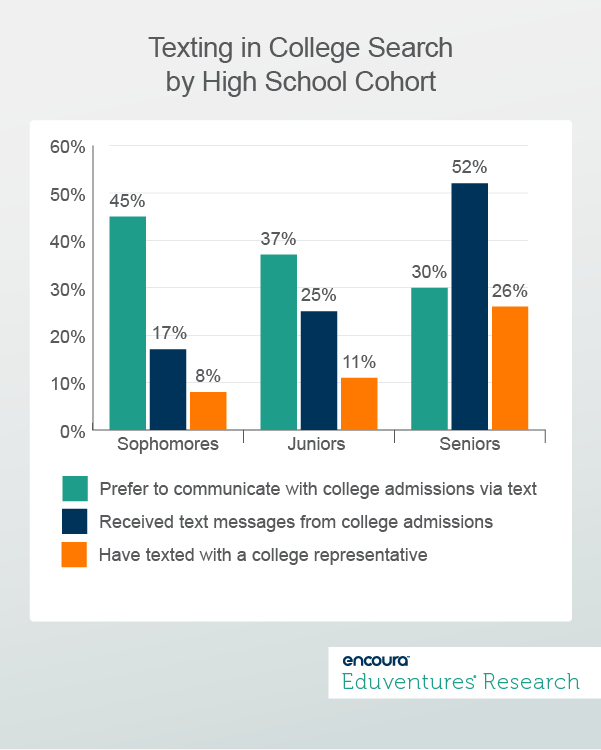 High school sophomores and juniors are most open to texting with college admissions (45% and 37%, respectively), but only 17% of sophomores and 25% of juniors say that schools have reached out via text message. Given the cost and complexity of mass texting (e.g., personalization, privacy considerations, and access to students’ mobile numbers), it is not surprising that younger cohorts do not receive as much mobile engagement. Sophomores, in particular, often explore potential schools in stealth mode and may not yet have shared their mobile numbers with prospective schools.

So, should institutions try to focus their texting outreach to younger cohorts and leave seniors alone? We uncovered an interesting relationship between high school senior preferences and school preferences (Figure 2). 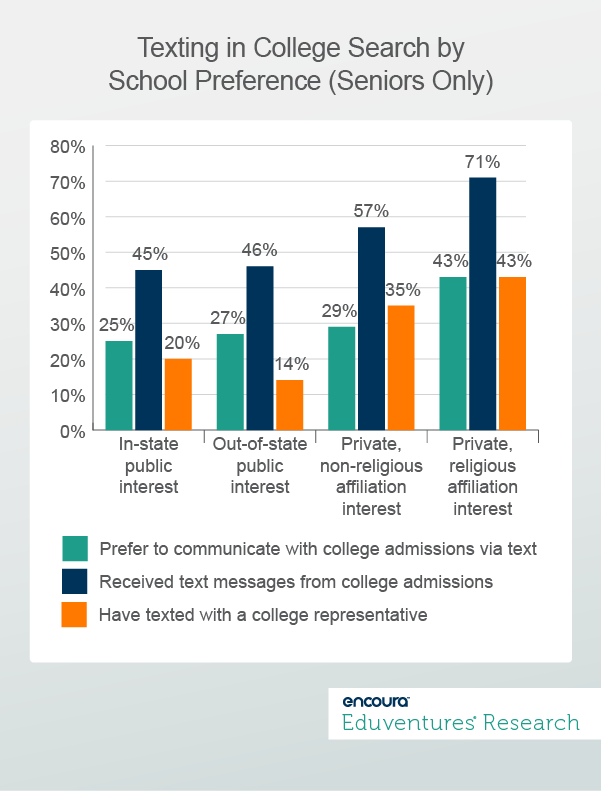 The data does not indicate the type of institutions these students engage with via text. Therefore, we can’t say with absolute certainty that private, religiously affiliated institutions text their prospects at a higher rate than other institutions, but it seems likely.

These differences are interesting, but do they matter? Our data suggests that while text messages won’t make or break the enrollment decision (that’s what campus visits are for), they can be an important part of the recruitment strategy. Students who engage with admissions via text appear to form a more impactful relationship with admissions representatives (Figure 3). 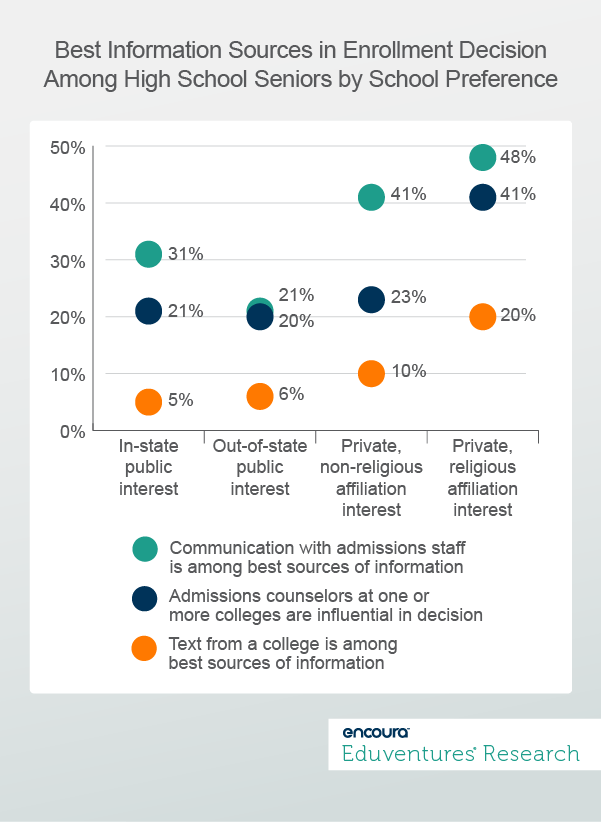 Furthermore, students in the private religious preference group say that interactions with the admissions staff have a higher impact on their enrollment decisions. In fact, they are twice as likely (41%) to say admissions counselors at their consideration schools are influential in the students’ enrollment decisions than students who are interested in a private, non-faith-based (23%), public, in-state (21%), or public, out-of-state (20%) institution.

Smaller prospective student populations allow for a more personal touch. Is this the secret to the effective use of texting in student recruitment? Texting platforms like Mongoose allow schools to personalize automated text messages at scale. This can be an effective way to get a student’s attention, as most students use mobile devices in their college searches.

But is this enough or does it take actual interpersonal communication to forge that impactful relationship between the student and the institution? And, what does that mean for schools that don’t have the resources to engage in texting conversations with individual students?

One of the key challenges for many institutions is scaling recruitment texting without sacrificing personalization. Perhaps texting should be left to the later stages of engagement, when admissions counselors send personal, individual text messages to admitted students. On the other hand, some institutions, like Georgia State University, have received great results with a highly automated texting process.

We suggest a two-pronged approach: schools should use the automated, personalized approach to begin the conversation and forge that initial relationship with prospects. They need to keep in mind that best practices for mass texting students include sending important and relevant content, such as campus visit dates and application reminders. Promotional content should be left to other channels.

Next, schools should use the personal touch approach, i.e., individual text messages from admissions counselors, to deepen the relationship with prospects who responded well to the automated outreach or have shown strong interest in other ways. Going from personalized to personal texting might just be what it takes to get a prospect over the finish line and on campus in the fall.

Prospective students are the leading edge of your brand; the students you recruit today represent your brand tomorrow. This means that successful recruiting not only fills your class, it also contributes to grass roots brand-building for your institution.