The Verdict on Micro-Campaigns

Only a few short years ago, many Eduventures clients were on the rebound from what was a trying time for development offices. The Great Recession had caused donor bases to dry up faster than we’d ever thought possible and threw a wrench in many large comprehensive campaign plans. While some schools put large campaigns on hold, others were left holding the bag with giant, public goals and no foreseeable way of achieving them. The case for an alternative to the comprehensive campaign had never been more enticing.

To help our clients explore alternatives, Eduventures developed a number of reports and tools focused on launching micro-campaigns, sometimes referred to as mini- or modular-campaigns. At the time, the concept of these smaller, shorter, overlapping, and never-ending campaigns was not new. But the idea that they could be strung together to replace the traditional five- to seven-year (or, increasingly, 10-year) comprehensive campaign had piqued the interest of many leaders in the field.

The potential benefits of this type of model were promising. Unlike comprehensive campaigns with long, drawn-out cycles, many funding priority “buckets” that are never filled, and the dreaded post-campaign slump with high staff turnover and low productivity, the micro-campaign model promised shorter and more focused bursts of activity that would engage different slices of the donor base over time. Just imagine: an end to donor fatigue, focused and realistic campaign goals, reasonable campaign timelines, and no more post-campaign slumps. Sign me up! A handful of institutions began  experimenting with models to take micro-campaigns to the next level.

Three years later, the results from these experiments are decidedly mixed. Some credit the approach with providing exactly the flexibility needed to meet the evolving needs of their institution. Others view that same flexibility as problematic and unable to provide the structure needed to get academic leaders to set priorities and follow through. Having left most of our recession jitters in the dust, it seems unlikely that micro-campaigns will ever truly serve as a replacement for the comprehensive campaign model, at least on a broad scale. This isn’t because the comprehensive campaign is perfect.  It is merely a tool—albeit a large, often unwieldy, and very flawed tool— to help colleges and universities get all stakeholders on the same page and achieve something together they otherwise wouldn’t.

More likely, micro-campaigns will continue to offer a compelling complement to a traditional campaign. If used strategically, they could even extend the timeline, lengthening the time between one comprehensive campaign and the next (see graphic below). 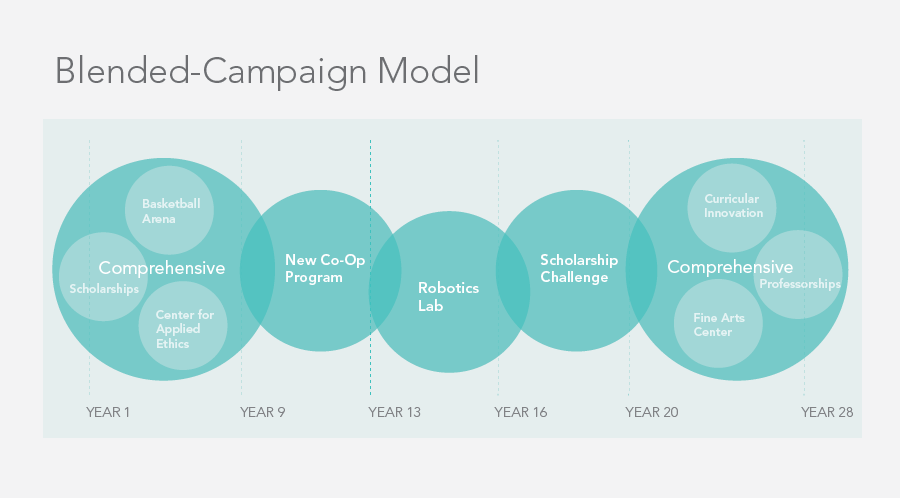 When effective, campaigns of any kind should provide a catalyst for: defining compelling funding priorities, organizing communications and engagement, establishing the commitment of campus stakeholders, engaging top donors in a coordinated and strategic way, and appropriately investing in advancement to stretch its sights and capabilities. For some institutions, it seems, the micro campaign model was not able to accomplish one or more of these key goals.

In our view, this may not be a failure of the micro-campaign itself and instead reflect its untested nature. Campaigns are ripe for innovation, and if more schools threw their hat in the micro-campaign ring, we’d have more opportunities to hone this or an alternative approach.  Until another model captures the imagination of a large number of leads, however, expect to see the comprehensive campaign for some time. For better or for worse, it still remains the best tool we’ve found.