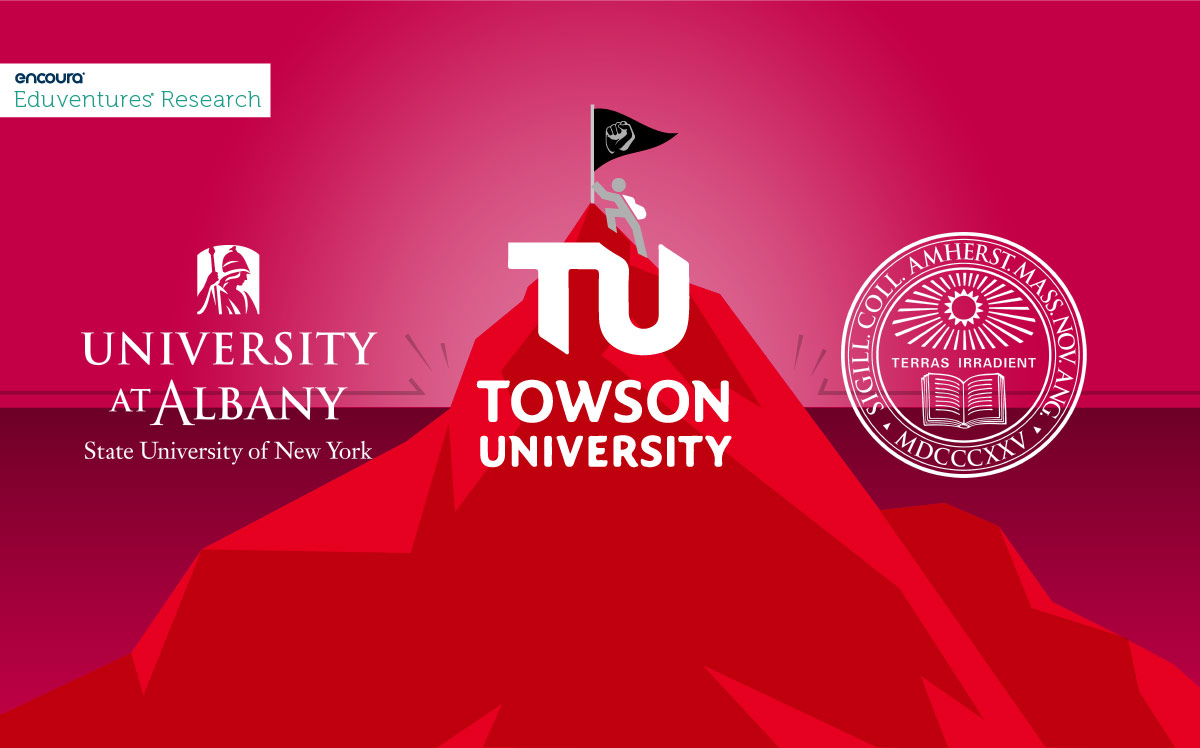 But a handful of institutions have overcome the sorry status quo and built a different narrative. Eduventures’ new report, Transcending the Current Higher Education Journey for Black Students: Colleges that Buck the Trend, highlights these exceptional schools and profiles three in-depth.

How have these schools managed to change the story? What is ordinary about these institutions, not special circumstances, makes them exceptional.

Exceptions to the Rule

Figure 1 compares graduation rates of Black students to that of all students (first-time, full-time undergraduate population). Simply outperforming or matching the institutional average, however, says nothing about the African-American graduation rate itself. Beating or equaling a lowly average is hardly worth celebrating.

But only 10 schools (1%) outperformed on all or most of the following metrics for Black or African-American students:

It is from this select group that Eduventures picked three schools for profiling. Please see our report for the names of all 10 schools. All of these schools would acknowledge they have plenty of work still to do, and none present a simple or linear narrative of success.

Our three case studies in the report, representing three very different types of institutions, are:

Figure 2 compares the performance of these three schools to sector averages.

At first glance, there is little that is distinctive about these schools:

Institutional location has something to do with outperformance, but there are far more counter-examples. SUNY Albany and Towson University would perhaps not have such a strong track record on Black enrollment and student success if they were not located in or near large urban areas with significant Black populations (Albany and Baltimore respectively). But there are numerous other institutions in somewhat similar settings with no such track record. Amherst College shows that location need not be an impediment to greater student diversity, and both SUNY Albany and Towson still lag their settings in terms of representation.

Towson University’s transition from a whites-only college in the 1960s to a multi-ethnic university, much more aligned with its north-of-Baltimore home, was inspired by early Black leaders such as Julius Chapman, the university’s first Dean of Minority Affairs. SUNY Albany’s first Black president, Robert J. Jones, in post from 2007 and 2012, provided a focal point as the university looked for new direction.

Resources also matter, but are not decisive.

Faculty and leadership influence is hard to discern.

When it comes to faculty and leadership, only Towson’s Black faculty ratios stand out, and only for non-tenured faculty. Black senior leaders are either absent or exceptional even at the three profiled institutions. SUNY Albany’s Dr. Jones aside, the most obvious Black senior leaders have a DEI brief, suggesting that other top roles remain a frontier even at schools with a strong track record on Black enrollment and graduation. Towson’s Black vice president for student affairs is notable.

The report also considers student support units and structures at the three profile schools, but little stands out as truly distinctive.

That a handful of schools have successfully challenged the narrative of Black undergraduate underperformance is not a matter of special circumstances, but of choice and persistence. There are hundreds of schools with missions, locations, resources, support arrangements, and leadership similar to SUNY Albany, Towson, and Amherst.

What distinguishes these schools, and the handful of others like them, is a long-term commitment to equitable access and outcomes for Black and African-American students rooted in a messy history of particular situations, settings, and individuals. The commitment is part-official, part-cultural, and part-random, ebbing and flowing over time as priorities and personalities shift. None of these schools are free from racial tensions or issues. Indeed, any increasingly large underrepresented student cohort might be expected to spark occasional debates or controversies on campus.

Beyond institutional factors, it goes without saying that student agency is a key variable in and of itself, and less directly within institutional control.

But it is clear, at SUNY Albany and Towson in particular, that early commitment was gradually rewarded with better student outcomes and subsequent higher enrollment of Black students. DEI efforts and institutional self-interest became increasingly aligned.

There is no “easy fix” for schools wanting to transform their track records on Black enrollment and outcomes, and no bright line can be drawn precisely codifying operational cause-and-effect. But long-term commitment to equity combined with honest evaluation and continuous improvement over time pays off.

This is empowering: choice trumps circumstances. With commitment and persistence, “any” institution can transcend the current higher education journey for Black students.

The full report is available for Eduventures clients in the Research Library of Encoura Data Lab. If you’d like to obtain a copy of the report and do not have access to Data Lab, please contact us at insights@eduventures.com.

Despite a year full of new challenges, you’ve made it past May 1st. Whether you’re breathing a sigh of relief or still working to get more deposits across the finish line, you’re looking toward summer and anticipating melt while being mindful of the need to direct your attention toward future classes. What strategies can you implement now to put you in the best position come fall?

In this webinar, we’ll hear from VP of Digital Solutions Reva Levin, who will identify practical and effective digital engagement strategies to help you stay connected to your admitted students throughout the summer, new opportunities to reach transfer students and bolster your incoming class, and emerging channels that can boost inquiry generation for future years. “360,316 already enrolled.” It is big numbers like this—featured on the homepage of the 10-course Data Science “specialization” from Johns Hopkins University and many others offered by other schools on Coursera, the giant MOOC platform, that both substantiate and...