The Once and Future Major: Changing Academic Interests and Your Recruitment Outreach We all know that Gen Z is mercurial in nature. College-bound Gen-Zer’s think they know who they want to be when they grow up, but often switch majors. This even happens mid-enrollment cycle. One thing is certain: most college-bound high school students will only look at your school if you offer the programs they think they want to study.

But if a prospective student declares interest in marine biology on her application, are you still sending her information about this program during the yield stage? What are the odds she has changed her mind before she makes her enrollment choice?

Our findings on how college-bound students change their academic interests can help make your yield communication more relevant.

To understand how students move through the enrollment funnel – and how they change in that short amount of time from application to enrollment decision – we examined responses from 7,300 college-bound high school seniors who participated in both our Prospective Student Research and our Admitted Student Research in the same enrollment cycle. These students indicated their academic interests in online surveys in the fall and then again in the late spring. (Note that this data was collected before the COVID-19 pandemic and changes are therefore not influenced by an extraordinary event.)

Among these students, we saw that about a quarter (27%) experienced a switch in academic interest. Only 2% switched to a major within the same broader academic area. For instance, a student who was originally interested in studying computer science in the fall switched to cybersecurity in the spring. Most of the switchers, 25% of the total, diverted from the academic category they had initially chosen.

The likelihood of switching major interests also varies greatly by academic field. Figure 1 shows how many students (among the top eight areas) stuck with their initial majors of interest, switched to a related major, or switched to an entirely different academic field by the time of enrollment. This shows that students who are interested in majoring in business (14% switched), education (18%), or engineering (19%) are typically the least likely to change their minds during senior year. Students interested in the liberal arts and humanities, on the other hand, are quite likely to change their minds. Nearly half of these students (48%) indicated a different academic interest in the spring. They were also most likely to choose a different program within the liberal arts and humanities (6%).

Finding a Pattern in the Chaos

You might be wondering where switchers who enrolled in a different academic field ended up. Figures 2, 3, and 4 show the paths students took among those with initial interests in liberal arts and humanities, natural and physical sciences, and behavioral and social sciences. 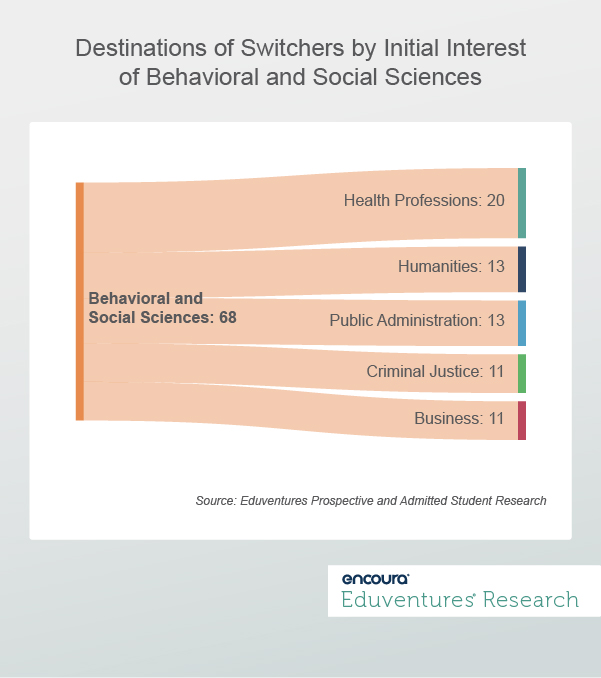 While students with initial interests in the behavioral and social sciences (Figure 4) showed the greatest variety in their next majors of interest, they were often drawn to adjacent fields like public administration and criminal justice. Students who had indicated the liberal arts and humanities (Figure 2) in the fall survey most frequently switched to the adjacent field of behavioral and social sciences (23%) at enrollment, but were also quite likely to be unsure of their academic plans (19%). Those who initially thought they wanted to major in a natural or physical science (Figure 3) were most drawn to the health professions (53%), but also engineering (11%)—indicating that as college became imminent, they leaned toward a clearer career path. (Source: Eduventures Prospective and Admitted Student Research)

Ultimately, when students changed their minds about their interests, the leap they took was often not too far afield from their original plans. Those who were interested in the hard sciences most often chose fields also based on these. Students interested in the humanities or behavioral and social sciences tended to switch to similar areas as well. The one exception to this rule is the health professions, which have historically been most popular among all prospective students. As the top initial choice for all students (21%), the health professions are also among the top areas to switch to, regardless of initial academic interest.

So, how do you communicate to your prospects about your academic programs?

When students inquire about specific programs, schools generally send them relevant information; consider this the conversation starter and foundation of the relationship. While engaging these students further, keep in mind that their interests may evolve. You can help them along the funnel by following these broad guidelines:

Of course, even while starting narrow, don’t forget to highlight the strengths, opportunities, outcomes, and value of the education at your school as a whole—no matter what a prospect’s program choice may be.