That’s the share of expenses that public colleges and universities devote to staff salaries and benefits. The ratio is similar at private schools, and neither figure has shifted much over time.

Higher education, despite decades of IT spend, remains a people-centric sector. Rather than demonstrably lowering costs, edtech is better known for “efficiency” hyperbole.

Online learning, another some-time efficiency cheerleader, has an interesting tale to tell when it comes to people and cost. Eduventures analysis suggests that, lately, online colleges have been spending more on… people.

Wholly online colleges and universities constitute only part of the online higher education sector—most online courses and programs are offered by campus-based institutions—but give a much “cleaner” read on operational realities. Personnel and financial data blurs campus and online activity at dual-mode schools.

Figure 1 breaks out labor (wages and benefits) as a proportion of total spend for the nation’s 12 largest wholly online four-year institutions (“Online Giants”). These giants enrolled a total of 648,000 students in fall 2020 (54,000 students on average). 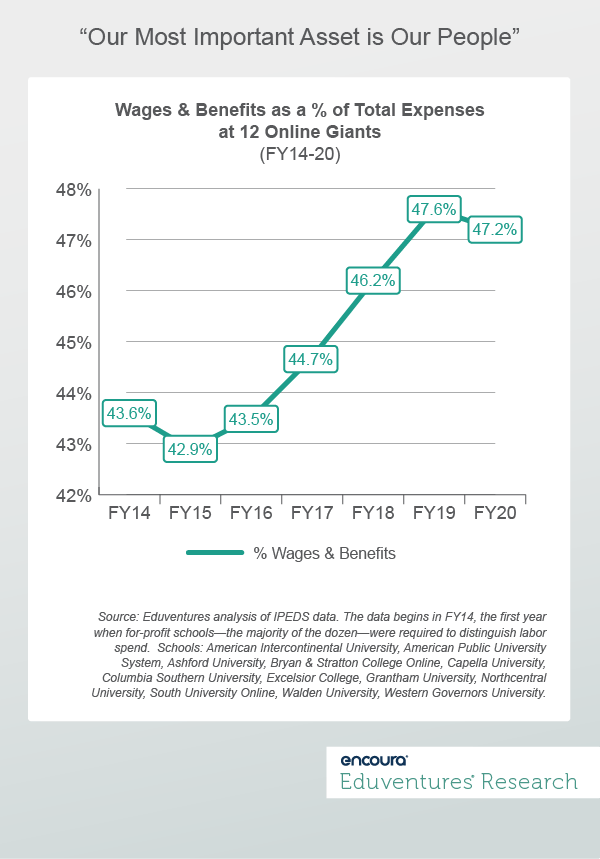 Our theory is that online colleges are bumping up against the limits of automation. To combat growing online competition from conventional schools, and arrest often lackluster undergraduate completion rates for wholly online programs, the giants have hired more support staff. Some online giants, such as Capella University and Western Governors University, have thrived of late, while others have struggled, adding incentive to innovate.

This theory is backed up by human resource trends. Between fiscal years 2015 and 2020, the online giants grew instructor headcount by less than 2%, slower than total enrollment gains of 5%, but:

Savings were found in administration: in just five years “Business and Finance” staff numbers fell by 30% and “Office and Administrative” staff by 60%.

Total staff headcount at the online giants grew by only 4% between 2015 and 2020, slower than enrollment. Growth in the labor ratio was driven by wages. Benefits expenditure, a bugbear for chief financial officers, in fact grew more slowly than total spend. Online colleges are spending more to attract the best talent, a trend consistent with the splurge on managers.

For both spend devoted to labor and staffing mix, how do the online giants compare to conventional schools?

Over the same period, the hundred largest, campus-based, public four-year schools spent proportionately more on people than the online giants: about 60% on staff; and the figure was about 57% for the 100 largest four-year privates. Both ratios declined modestly—by not much more than a percentage point—through 2019 and then regained most of that ground in 2020.

So, the largest online colleges devote a smaller share of spending on people: less than 48% in 2019 compared to 60% for large publics and 57% for large privates. But the gap has closed somewhat: the online giants people ratio was only 71% of the large public ratio in 2015 but 81% by 2019.

With the exception of “sales,” the online giants enroll more students per staff member across all staff types—from twice to more than 20 times as many.

But the giants are trying to mitigate that much-higher-than-average instructor ratio by investing in more student/academic affairs staff, taking that per-student ratio down to 1.9 compared to the largest publics: the narrowest ratio of the six staff types in Table 1.

Additional management headcount may be an attempt to figure out how new processes and technology can improve quality and lower costs, but hiring more people appears a prerequisite. Yet even with the increased management headcount the largest publics employ nearly five times the number of managers per student retained by the online giants.

To a much greater extent than large publics and privates, the online giants are paying for student support and management investment by slashing business, finance, and administrative staff.

Online colleges and universities have changed the game. As discussed in a 2019 Wake-Up Call, average spend per student at these schools is much lower (a quarter-to-a-fifth as big) versus the campus-based norm, leveraging a modest physical footprint and less instructor-intensive asynchronous learning delivery. Even the sternest critics of online learning would be hard-pressed to conclude that a fifth of the spend guarantees a fifth of the quality.

But in recent years the largest online colleges have addressed experiential limitations and inflated student attrition by investing more in people than technology. Students have always had the option to learn largely on their own, whether through the U.S. mail or the latest adaptive learning software, but human interaction endures despite the price tag. While student support and management headcount have grown at online colleges, back-office numbers have tumbled, suggesting renewed administrative automation.

The pandemic forced many campus-based schools to up their investments in technology, while staff were let go. As of the close of September 2021, total college and university employment was still seven percent below the pre-COVID figure. Getting the balance right going forward is critical: splurging on technology and people at the same time will only exacerbate higher education’s affordability and value-for-money challenges.

It is easy to caricature the breathless asides of edtech champions, but they speak to an uncomfortable fact: college quality still largely boils down to expensive, hard-to-scale, idiosyncratic people. Technology can help boost quality but does not have all the answers. The online giants have shown that different capital-to-labor ratios are consistent with a respectable student experience but, for now at least, their latest-greatest innovation is more people.

Given the uncertainty that young adults are still feeling about the pandemic’s effects on their college experiences, students are exploring new transfer possibilities. Enrollment marketing teams should consider how a robust transfer student engagement strategy can maximize exposure and engagement with their best-fit transfer students.

What are your ideal prospective transfer students doing right now? There’s a high likelihood that they’re scrolling through or streaming on their favorite apps. A well-placed ad on their video or social media platforms can influence and support their educational decisions in significant ways.

In this webinar, Eduventures Senior Analyst Johanna Trovato will kick us off with the latest Student Sentiment Research revealing the specific ways today’s prospective students are searching for colleges. We will then hear from VP of Encoura Digital Solutions Reva Levin, who will share which mobile and video targeting strategies are most effective to maximize your exposure and engagement with your ideal transfer students. We’ll also explore all the rich targeting criteria that exists on YouTube and how to leverage that to capture more transfer prospects at the beginning of their searches for schools to call home.

Join us on Thursday, November 18 as we reveal how institutions can begin using these transfer student engagement strategies to impact their upcoming semester’s transfer enrollment. The Teachers are Not Alright

With September in full swing, K-12 teachers have returned to the classroom. And after enduring a year of hastily designed remote learning or careful mitigation of in-person instruction, they were no doubt eager for a sense of normalcy. The only certainty ahead,... 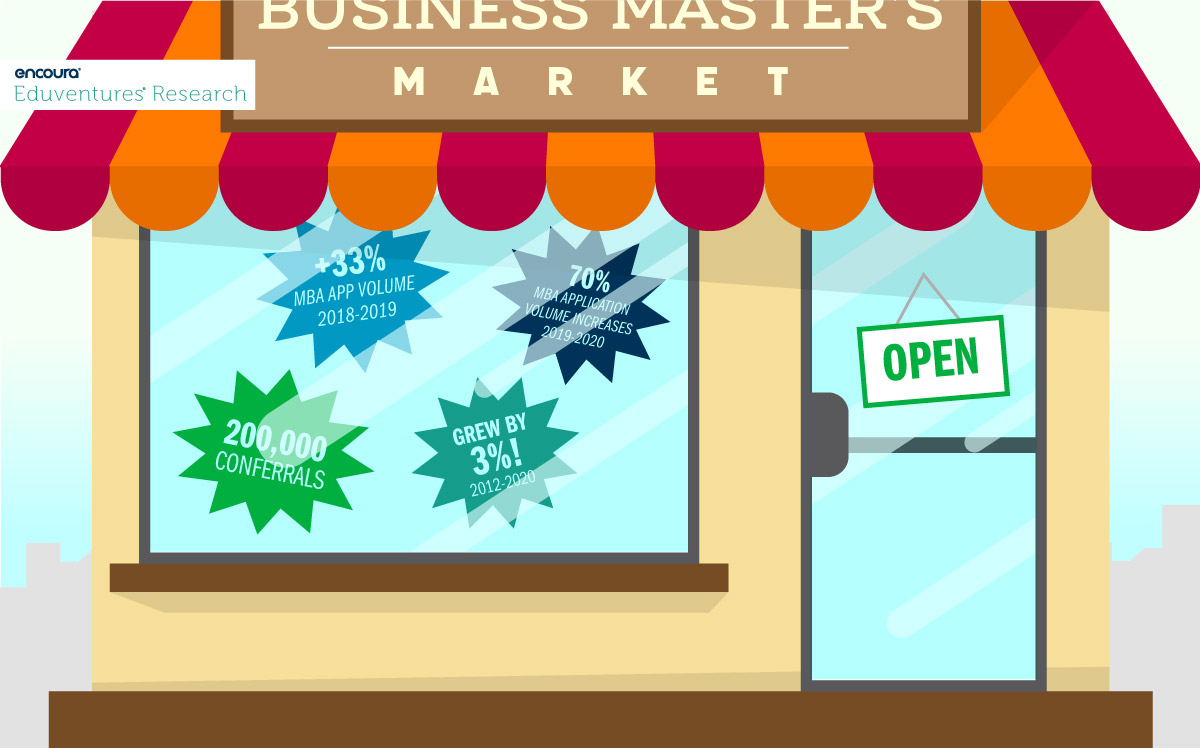 The business master’s market has long enjoyed its place at the top of the academic field food chain. In 2020, institutions of higher education reported nearly 200,000 master’s degree conferrals from business-aligned programs. The next largest market? Education, with... There is no denying that the health-aligned program market has experienced massive growth in recent years. Health-aligned bachelor’s and master’s degree conferrals both grew by more than 50% between 2012 and 2019. But as we emerge from the COVID-19 pandemic, what... The Doctor Will (Virtually) See You Now: A Look at the Emerging Telehealth Market

A digital scale, a portable blood pressure monitor, and an internet connection. And just like that, my wife was attending her prenatal appointments in the age of COVID-19. Like millions of Americans, this was our first foray into telehealth. Abiding by social...