One-third of first-year college students we surveyed in the spring of 2021 told us their college choice had been affected by the pandemic. The question is, as vaccination rates inch up and we learn to live with COVID, will we see a great transfer student migration over the next few years?

It seems plausible that this large group of students might abandon the circumstantial choices they had to make and pursue the educational experiences they had always dreamed of. In essence, should institutions get ready to embrace a flood of transfer applications or, on the flip side, worry about a mass exodus of their current students?

Not a Tsunami but a Ripple

Let’s start by learning more about this third of first-year students (34%) who told us that the pandemic had affected their transfer choices. These students were most likely enrolled at community colleges (47%) and least likely to be enrolled at in-state, private four-year schools (26%). Pandemic influence, however, does not necessarily mean that students think they made the wrong choices. In fact, when we asked these students whether they would still attend the same schools had the pandemic never happened, 50% said they “probably” or “definitely” would have, while 26% were unsure, and only 24% said “probably” or “definitely” not.

Does this mean they plan to graduate from these schools? Figure 1 shows that students who said their choices were influenced by the pandemic were indeed more likely to have transfer plans. 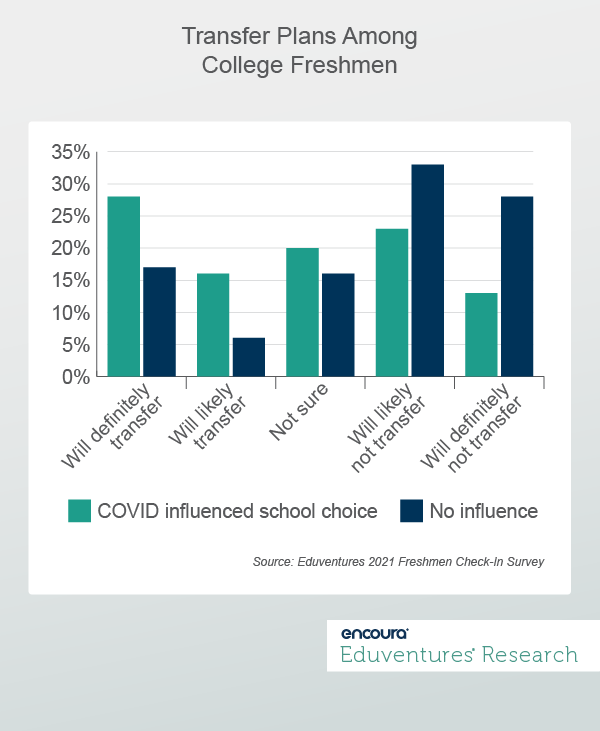 Not surprisingly, transfer plans were most common among the students who the pandemic had driven toward community colleges—the leading source of transfer traffic pre-pandemic as well. Eighty-one percent of these students reported potential transfer plans compared to only 16% of students enrolled at private four-year schools.

This indicates that, rather than a tsunami, the next couple of years may bring with it some transfer movement, but for a smaller student segment. This begs the question: if we are seeing similarities to pre-pandemic transfer patterns, can the transfer plans of current students really be attributed to the pandemic?

Interestingly, when asked whether their transfer plans were directly related to the pandemic, the students most likely to have transfer plans—those enrolled at community colleges—were less likely to affirm this than those at four-year schools (Figure 2). The students who said COVID-19 had made them more likely to transfer most frequently cited wanting to take classes on campus, wanting to attend their dream schools, and regretting their school choices as key drivers. In essence, these students, who are often enrolled at four-year schools, are driven by dissatisfaction with their current schools. In contrast, students at community colleges may have been more likely to make those enrollment choices because of the pandemic, but their plans to transfer were less driven by circumstances.

While our data indicates that the big transfer wave does not appear to be building and that transfer plans seem to mirror pre-pandemic patterns, other factors suggest that we should still closely watch the transfer market for two reasons. The first reason is the pre-pandemic change in the NACAC code of ethics. Overshadowed by the COVID-19 pandemic, the NACAC changes have silently made an impact on four-year-to-four-year transfer patterns and retention. An increasing number of clients have noted that their enrolled students are being actively pursued by competitor institutions, signaling that four-year-to-four-year transfer movement is potentially increasing, albeit not necessarily for pandemic-related reasons.

These circumstances strongly suggest that schools need to pay close attention to their transfer student populations as well as to the transfer recruitment efforts of their competitors, now more than ever.

One thing is certain: there is always a segment of students who will consider transferring. And while their concerns, motivations, and preferences don’t appear to have changed significantly over the past year, their circumstances have. Many first-generation, low-income students—who are most likely to consider a community college as a first step—may have paused their postsecondary plans indefinitely, further deepening equity gaps in higher education. Students at four-year schools, on the other hand, are now receiving transfer outreach, possibly spurring plans they might not have had otherwise made.

To help you navigate the evolving transfer market, keep an eye out for the results of our 2021 Transfer Student Research. Stay tuned! Discover How Institutions Achieve Their Goals

Our mission at ACT® | NRCCUA® is to encourage higher education institutions to make more informed decisions. By providing data science and technology, we’ve helped over 2,000 institutions find and engage their best-fit students.

Toward this end, we’ve heard from many of our member institutions on how they’ve been able to achieve their goals through our research, technology, and solutions. We’ve compiled the Encoura Client Experience Collection to share their stories in the hopes that it will inspire and equip others to make more informed decisions, so that every student and institution can achieve their goals.