We were saddened to learn of the passing of Michael R. Sandler, Eduventures founder. Mike Sandler (1940-2020) was a force for good in American education, championing numerous entrepreneurial and philanthropic initiatives over four decades. In 1993, Mike established Eduventures as a broker between education companies and investors, adding pioneering market research and establishing the foundation for the company’s future. Mike’s obituary, published in the Boston Globe, may be found here.

Making predictions has been more challenging this year than usual. A global pandemic, last week’s assault on our democracy in Washington D.C., and the resignation of Education Secretary Betsy DeVos underscore that we are living through a particularly volatile period. Our humble role is to try to see through the smoke to what lies beyond for higher education in 2021.

During the pandemic, colleges and universities nationwide have had to caveat, curtail, and constrain campus life. Excitable edtech press releases notwithstanding, school leadership, faculty, staff, and students are holding their breath until normality resumes. But out of the chaos, a few institutions will turn lead into gold.

Online learning has had an uneven pandemic. The modality rode to the rescue, affording precious academic continuity. But too often it appeared second-rate as hundreds of thousands of faculty struggled with the rudiments of online instructional design, and millions of students mourned the innumerable things online could not give them. Pre-crisis online stalwarts felt compelled to distinguish between pandemic-induced “remote instruction” and true online learning.

We recently pointed to University of Florida-Online (U.F.-Online) as an intriguing example of an out-of-the-ordinary leverage of online learning. While the original conception of U.F.-Online was conventional, officials began to notice traditional-aged students using it as a backdoor to the main campus, with some students even moving to Gainseville to combine online study and campus life. The student hack is now an institutional strategy called Pathway to Campus Enrollment (PaCE).

But the value of U.F.-Online is not simply about expanded enrollment. Figure 1 compares instructional and student services spend per student for U.F.-Online versus the university’s Gainesville campus. University of Florida-Gainesville spends almost four times as much on instruction and student services per full-time-equivalent student (FTE) as University of Florida-Online. Some of the gap can be explained by the former’s large graduate student population, about a third of the total, but modality is the real story.

U.F.-Online was built from the ground-up, affording greater cost efficiencies than realized by the typically decentralized, faculty-led online efforts folded into traditional campuses nationwide. Faculty members are central to U.F.-Online, as course development partners and as instructors, but within an operational framework that boosts quality and reduces cost.

U.F.-Online brings in much lower tuition and fees per-FTE but also costs the state considerably less. The net cost to the Sunshine State per FTE at the U.F. main campus is about $22,000, but only $5,000 at U.F.-Online.

My 2021 prediction: as public and private flagships everywhere are caught between cratering tax revenues and financially-distressed families, a handful will follow Florida’s lead, using online to widen access, lower cost, and re-think the student experience for traditional (as well as other) undergraduates.

Handled poorly, such efforts might backfire, reinforcing negative remote learning experiences from the pandemic. But done right, innovation will help colleges to take their pandemic-exacerbated predicaments seriously rather than simply begging for more funding, buying more equipment, and pushing up tuition.

The last time Democrats controlled Congress and the White House—the first two years of the Obama presidency—for-profit colleges were in the firing line. The Obama administration faced for-profit enrollment that had more than tripled in 10 years, peaking among vulnerable first-generation, minority, and adult undergraduates. The combination of economic distress wrought by the Great Recession and the hard-sell, high-tuition, big-loan for-profit model, combined with concerns about poor graduation rates and job outcomes, convinced officials to act.

I think things will play out differently this time now that Democrats once again have control. To explain why, let us start by looking back.

The Trump administration nixed Gainful Employment, weakened the Consumer Financial Protection Bureau (CFPB), and took a more conservative approach on borrower-defense, arguing that singling out for-profits was not always helpful. The Trump Department of Education had no beef with OPMs.

Will a Biden-appointed Secretary for Education mount a fresh assault on for-profits and OPMs? I don’t think so. 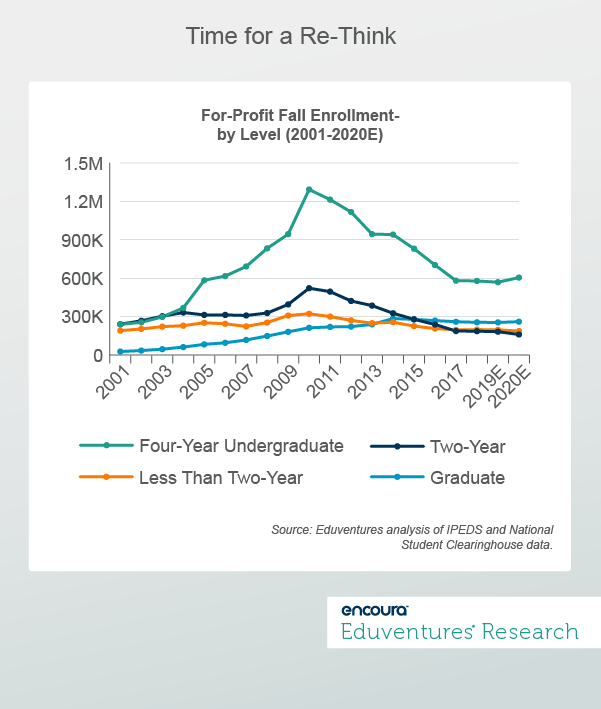 For-profit higher education in 2020 looks very different than a decade ago.

The incoming Biden administration confronts a for-profit sector less than half its peak size at the undergraduate level, if still considerably bigger than it was in 2000. A robust pre-COVID economy, nonprofit competition, consumer skepticism, and regulation, cut the sector back down to size. The four-year undergraduate slide appears to have arrested—and National Student Clearinghouse reported the first four-year for-profit undergraduate enrollment gain in a decade—but no rip-roaring turnaround is in sight. Two-year and less-than-two-year schools continue to shrink.

Nonprofit conversions account for some of the downturn. Some big players, notably Grand Canyon University, largely free of enrollment and regulatory troubles, have become nonprofit, as have a number of mid-sized operations. Two challenged brands—Ashford University and Kaplan University—have been folded under major public universities in quasi-OPM relationships. Conversion to nonprofit status is no cure-all: better-shape institutions tend to do well, and distressed assets tend to struggle.

For-profit fortunes did not improve under the Trump administration. Only graduate enrollment grew, recently surpassing the two-year and less-than-two-year totals, but is unlikely to whip up regulatory fervor.

In summary, in 2021, for-profit higher education is small and quiescent enough to not warrant another regulatory surge. Remaining for-profits are (generally speaking) the best of the bunch, and have worked hard to carve out in-demand niches and demonstrate value; but another enrollment bubble seems far-fetched. Stricter rules on nonprofit conversions, and perhaps a less-forgiving 90-10 rule—governing the revenue ratio for-profits must derive from sources other than federal student aid—might be areas where the new administration gets tough.

Biden is more likely to focus on investment in public higher education, which may prove more effective at reining in for-profits.

What about OPMs? A recent Snapshot dives deeper into that question.

Assuming COVID-19 cooperates, fall 2021 should see first-time undergraduate enrollment bounce back, particularly at four-year schools. But higher education leaders need to get real: non-strategic use of online learning and bloated program portfolios should not be allowed to limp out the other side of the pandemic. For-profits may be chastened but they’ll be back if nonprofits leave value on the table.

You’ve already invested in digital media to enroll Gen Z. But how do you accurately measure the success of any one campaign and what metrics really matter as you look to improve engagement with prospective students?

How should you transition from application to yield season in a year where students need more support than ever? What is the best way to support student decision making if you can only reach them virtually? 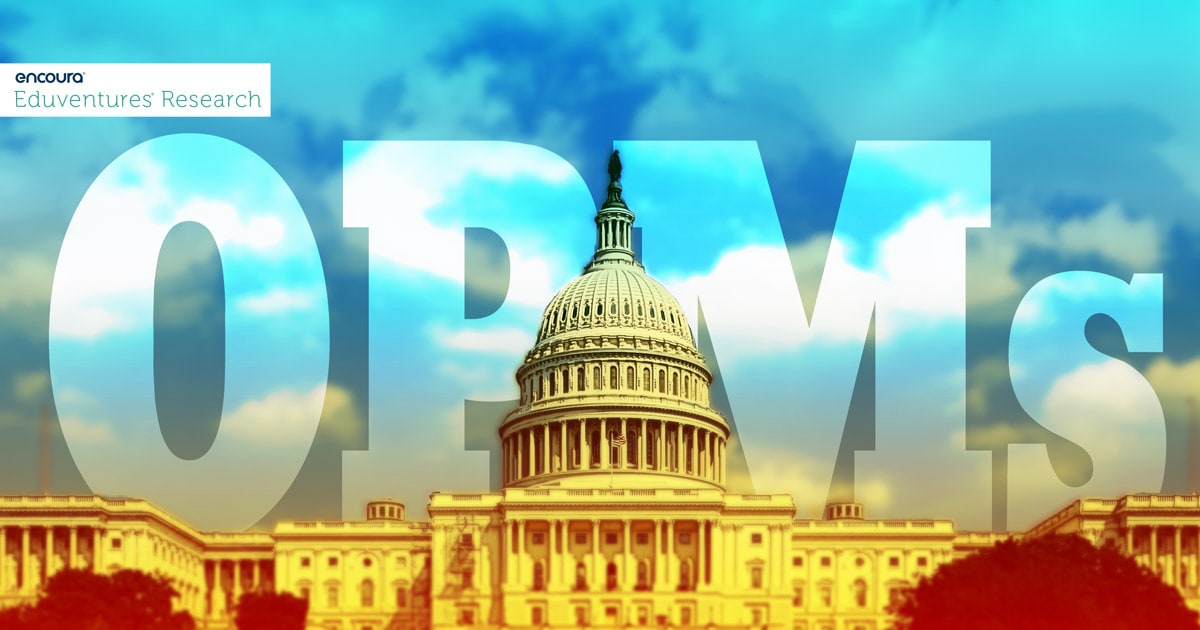