In June, legions of graduates feel the momentary joy of accomplishment just before the reality of becoming a responsible adult sets in. It’s also when Eduventures pays tribute to the institutions that best help their students navigate to graduation through our annual retention ratings. This year, we’ve also learned and grown and have graduated to a more comprehensive rating system that accounts for both retention and completion. It’s certainly not a complete definition, but these two metrics are some of the first indicators of student success. 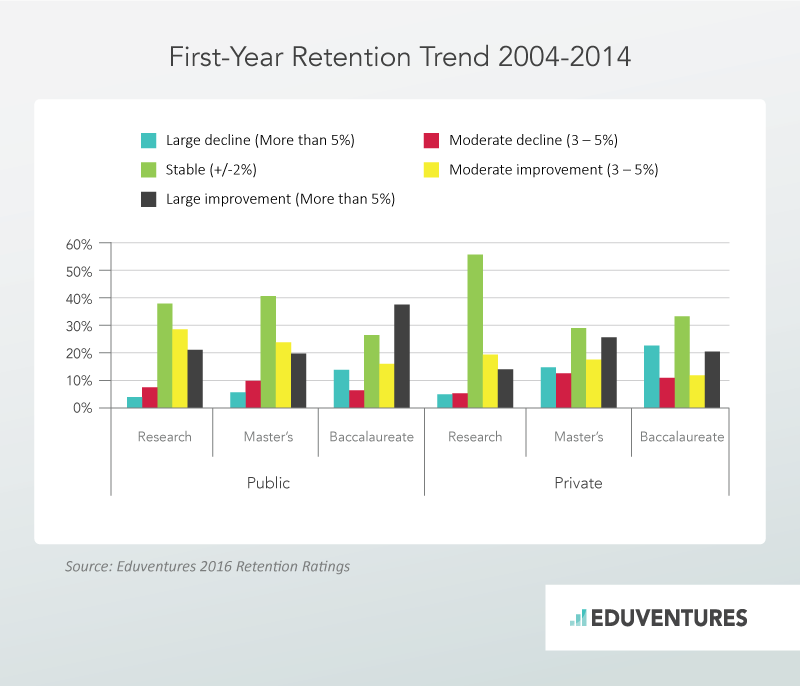 In addition, we’ve refined our ratings method to add depth to our analysis. Historically, the hallmark of our retention ratings has been that it scores how institutions perform on first-year retention given their institutional circumstances. This measurement of an institution against its own circumstance is still extremely important. This year, we’ve added trend data to the analysis to credit institutions that have made sustained improvement in measures of student success.

With these two big ideas, performance given institutional circumstance and performance trends over time, we created four specific measures. The first two measures are derived from our linear regression model of predicted student success with inputs from across a variety of variables, including institutional characteristics and academic, social, affordability, and demographic factors. The second two are built upon 2004 to 2014 first-year retention and six-year graduation trend data. These four factors are:

Additionally, we developed ratings within six broad categories of institutions based on a simplified Carnegie Classification and the control of the institution. Each institution receives a score from 1 to 100 in the four categories, which are equally weighted to derive an overall score. See our methodology to learn more about the regression and scoring model we used to develop the overall ratings.

Let’s take a look at some of those public institutions that are driving improvements.

Top public research/doctoral institutions have made many improvements and outperform their predictions, but they still have work to do. The top performer, University of South Florida, receives very high marks for improving its graduation rate and good—but not great—scores across the other dimensions. That’s good work, but they won’t be satisfied with the results yet.

Among public master’s-level institutions we see some of the same patterns.

Consistent performance across all four indicators is hard to find among public master’s-level institutions. The top institution, Texas A & M International University, beats the odds given its institutional circumstances, but has made little improvement in retention rates over the years. Most notable is the presence of three California State University (CSU) campuses in the top institutions. In this case, there is not only a CSU system mandate, but we also see evidence of system-wide tools being developed to manage student success. The CSU system has developed a student success dashboard to find at-risk students and develop intervention strategies based on historical data and predictive analytics.

The moral of this story is that there are as many stories of student success as there are institutions. Sustained improvement and performance is hard to come by without a strong executive mandate, a keen understanding of institutional context, and the tools to quickly identify at-risk students, roll out interventions, and measure their effectiveness. We’ve identified institutions that are making progress over time in their own particular circumstance. Look to our future work for in-depth stories of best practices in student success.

In the meantime, see how your institution stacks up in our student success ratings.