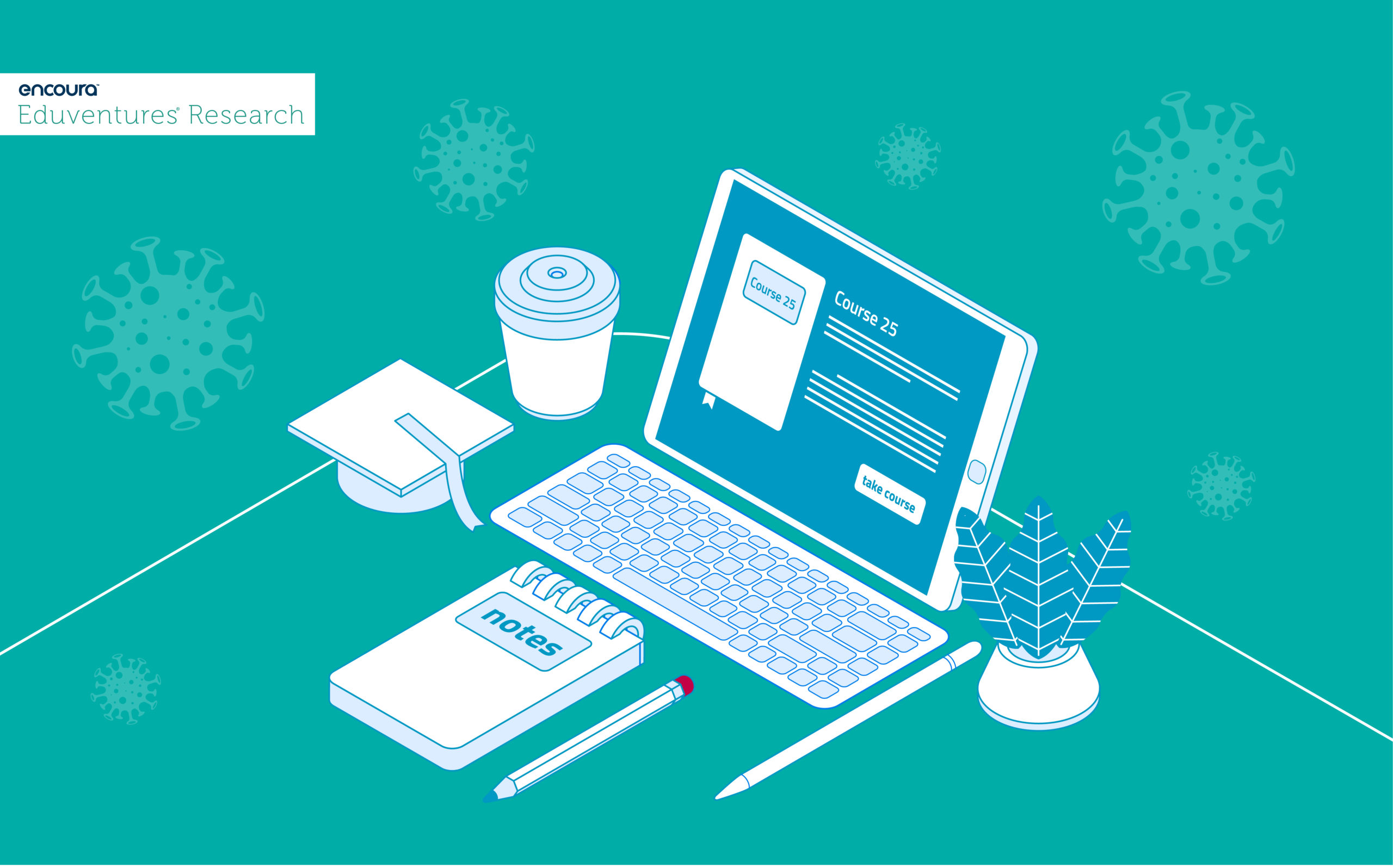 There’s little doubt that 2020 will go down as the year of educating differently. With higher education turned upside down, how are adult learners responding to these unprecedented events? Will a fear of on-campus learning drive more adults to embrace online formats? Will we see an uptick in adult demand for degrees? Or, will demand be offset by diminished financial resources?

In June, Eduventures surveyed more than 2,500 prospective adult learners on whether COVID-19 had altered their interests in postsecondary education. Here are three takeaways: 1) Change in Demand, 2) Desired Credentials, and 3) Delivery Mode.

1. Change in Demand: Adult learners want to enroll, but COVID-19 has eroded commitment and increased skepticism.

Enrollment in postsecondary education, particularly among adults, has tended to increase during economic downturns.  Will the COVID-19 recession play out the same way?

Compared with 2019, Eduventures’ June 2020 data reveals the uncertainties prospective adult learners are dealing with. In 2019, 76% of survey respondents expressed some interest in returning to school; a year later, despite COVID-19 and a deep recession, this rate has held steady. Given past trends, it may seem surprising that we’ve yet to see adult prospects respond to the new normal.

Respondents are divided into three broad categories based on relative interest in postsecondary enrollment over a variety of time periods up to 36 months:

Figure 1 suggests that while overall demand is steady, the ratio of deeper interest, i.e., “committed” prospects has declined, while the “skeptical” cohort has increased. This pattern indicates that while overall demand may be steady, relative commitment has weakened. The prospect of returning to school in person may terrify some adults, especially those who are also caretakers for their families. When asked to describe COVID-19’s influence, 25% of prospects reported a reluctance to “return to public gatherings.” Job or income loss was cited by 15%, suggesting that enrollment enthusiasm is tempered by financial pressures. These concerns are consistent among prospects seeking advanced or undergraduate degrees and those seeking certificates or vocational training.

Does this caution translate into a preference for shorter, more transactional credentials rather than degrees? The answer highlights an important dimension of shifting demand.

2. Desired Credentials: Uptick in preferences for undergraduate degrees and certificates.

When asked to identify when they would want to return to school and which credentials they would likely seek, June 2020 prospects conveyed some notable preferences. Figure 2 shows that 77% of respondents who hope to enroll within 90 days express greater interest in undergraduate degrees and non-degree credentials. Interest in graduate and professional degrees begins to increase for prospects who envisage delaying enrollment for at least 12 months. Compared to 2019, for prospects seeking to enroll within 90 days:

For prospects seeking to enroll in three to six months, there is a 10% increase (year-over-year) in undergraduate degrees.

The economic dislocation triggered by the pandemic appears to be boosting postsecondary interest among those most impacted: people with lower levels of education in vulnerable occupations. Increased interest in non-degree credentials is consistent with financial and time constraints.

What about delivery mode?

Eduventures’ pre-COVID-19 surveys of adult prospects revealed majority enthusiasm for blended or fully online learning. It is also true that many adults still had reservations about the modality, worrying about quality, clunky technology, and isolation from peers and faculty. Figure 3 shows that preference for wholly online has nearly doubled among prospects planning to enroll soon (from 22% pre-pandemic to 43%). It also indicates that preference for online learning could remain higher than usual longer-term, for both wholly online (a projected 7% increase six or more months out), and for “most courses” online (a projected 6% increase of six or more months out). These patterns are consistent when controlling for levels of interest, ranging from “committed” to “skeptical.”

Of course, during a pandemic, a strong “preference” for online must be interpreted carefully: many adults may have little choice.

The increased short-term interest in undergraduate degrees and certificates (Figure 2) may account for some of this online learning spike. Such prospects have historically exhibited greater enthusiasm for fully online classes, despite having less experience with the modality and despite evidence that such learners often struggle with fully online.

Amid widely varying predictions for Fall 2020 traditional learner enrollment, should institutions expect a counter-cyclical adult enrollment cavalry to ride over the hill to their rescue?

Perhaps, but not quite yet.

During this pandemic-induced recession, adults want to return to school, but circumstances are forcing some of them to rethink how and when.

As the impact of COVID-19 continues to evolve, adult learner enrollment is more likely to reflect an interaction among competing forces. Increased demand for sub-graduate credentials is on the rise among prospects most impacted by circumstances, but demand is offset by continued public health concerns and limited financial resources.

And when the pandemic stabilizes, the economy revives, or more federal stimulus is forthcoming, more adults may see both the value of furthering their educations and the means to do so. In the meantime, schools that can channel an engaging experience, return-on-investment (ROI), and affordability will stand out.

Eduventures will release a report based on this June 2020 data in the coming weeks, benchmarking against our 2019 findings. The report will include additional demographic, academic level, and field of study detail, as well as an update on prospect perceptions of the adult student experience and the most used and useful marketing channels. We will also revisit this research with a follow-up survey in Fall 2020 to further assess the evolving impact of COVID-19 and the economy on adult learner enrollment. We understand the incredible challenges that COVID-19 has caused for each of you, your institutions, and most importantly, your students. We recognize the immediate impact the industry is already facing, and we understand the potential long-term consequences to come. We are committed to being a trusted resource for all of our members and providing institutions with timely insight to better support your evolving needs.

In addition to our weekly Wake-Up Call, we are committed to delivering timely and relevant answers to real-world questions that institutions are now facing in light of COVID-19. These Snapshots will cover a broad range of questions that our team has received over the last several weeks. You’ll find concise and pragmatic advice around traditional student demand, program innovation, and adult learner demand. Q. What kinds of questions should I be asking? I don’t know what to ask.   Start with honest reflection on your school’s place in the world. The more selective and wealthier your school, the more easily you can ride out the medium-term, worst-case scenario, of... Adult Learners’ Postsecondary Puzzle: Back to School or Back to Work?

Last week, Eduventures published its most recent study of prospective adult learners, the 2020 Adult Prospect Research Report™. While it confirms that demand for affordability and flexibility remain high, it also identifies some new patterns regarding how prospective adult learners make decisions about their educations, which we’ve identified as postsecondary capital.